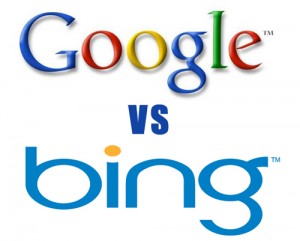 Apparently Google, the search engine giant, has accused Microsoft’s Bing of copying its search results, though Microsoft is refuting the claim.

Amit Singhal, the man who oversees Google’s search ranking algorithm, talked about how SEO companies and their services are impacting the SERPs. Full fledged investigations began last year after Google noticed that unusual searches were returning the same results on both search engines.

According to Singhal, “It all started with tarsorrhaphy. Really. As it happens, tarsorrhaphy is a rare surgical procedure on eyelids and in the summer of 2010, we were looking at the search results for an unusual misspelled query [torsorophy]. Google returned the correct spelling — tarsorrhaphy — along with the results for the corrected query. At that time, Bing had no results for the misspelling. Later in the summer, Bing started returning our first result to their users without offering the spell correction.”

Singhal added, “This was very strange. How could they return our first result to their users without the correct spelling? Had they known the correct spelling, they could have returned several more relevant results for the corrected query.” But Google wasn’t 100% sure if Bing had stolen their results, so the crafty search engine wizards laid a trap for Bing. Google used 100 meaningless search queries, like “hiybbprqag”, and matched them with results that were completely unrelated. Google said Bing soon started showing the same results for the same nonsensical search queries.

Singhal stated, “It’s cheating to me because we work incredibly hard and have done so for years but they just get there based on our hard work.”

Dr. Harry Shum, Microsoft Corporate Vice President of Bing, has refuted Google’s claim on the company’s official blog. Shum stated, “We use over 1,000 different signals and features in our ranking algorithm. A small piece of that is clickstream data we get from some of our customers, who opt-in to sharing anonymous data as they navigate the web in order to help us improve the experience for all users.”

“To be clear, we learn from all of our customers. What we saw in today’s story was a spy-novelesque stunt to generate extreme outliers in tail query ranking. It was a creative tactic by a competitor, and we’ll take it as a back-handed compliment,” he concluded.

This is definitely turning out to be an interesting development. If Bing did steal search results from Google, then this could be a serious blow to Microsoft and could quite possibly solidify Google as the top search engine.