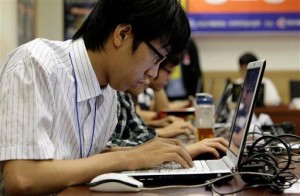 A computer virus attacked 40 computers in Seoul, South Korea today which included the presidential Blue House, the Foreign Ministry, the country’s biggest bank, the two largest search engines, a major online auction house and some military sites for both Korea and America.

The source of the attack was not immediately clear, however, the National Police Agency was investigating the assault. Discovery of the attack is credited to AhnLab, a leading internet security firm located in Seoul. According to computer analysts, the episode was a distributed denial of service attack. Infected computers in these kinds of attacks are known as zombies and try to access targeted websites simultaneously in an attempt to overwhelm them with enough traffic to crash their servers.

According to a South Korean government official, there has been “no major damage at all” to the computer system at the Blue House. “We were attacked, but it was defended,” the Official said. The Official also noted that the Blue House, as well as other agencies, had installed security countermeasures after a major attack occurred in South Korea back in 2009. The effect of that attack was “quite chaotic” according to the official.

Song Chang-min, a spokesman for AhnLab, stated that the two attacks definitely had some similarities which included the targeted sites. The virus was identified on Thursday night and then a free anti-virus solution was quickly distributed  for other computers to download.

According to Mr. Song, “This wasn’t as serious as 2009, but it still makes servers go down. Some websites going down for even a minute or two, especially commercial sites, can be a big problem. It can be critical.”

Mr. Song stated that AhnLab detected plans for a second attack at 6:30 p.m. The attack actually did occur and even though widespread damage was adverted, some hard drives might have been destroyed and some files may have been corrupted.

Some of the sites hit by the attack included Kookmin Bank, the Ministry of Foreign Affairs and Trade, Naver and Daum, the National Assembly, the Unification Ministry, the Financial Services Commission, the National Regulatory Agency and Auction.com.