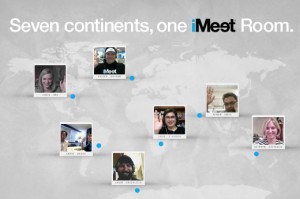 According to chairman, CEO and founder of PGi Boland T. Jones, “We’re thrilled and humbled by the number of iMeet users who took time out of their day to vote for us. With iMeet, PGi set out to reinvent video meetings by making them more personal and accessible to all people in an organization, regardless of their role, location or devices. This award is further proof that we’ve hit a nerve. We’re encouraged by the positive reception of iMeet as we continue to make better meetings a reality.”

iMeet gives users their own personal video meeting room online for their video conferencing. The iMeet experience is simple, social and enjoyable all without any stressful downloads, hardware investments or IT support to hassle with. After launching in January, the iMeet community has grown to over 35,000 people who engage in better video meeting experiences each and every day.

Over 2,800 nominations from organizations big and small, from virtually every industry, were submitted for Stevie Award consideration in over 40 categories. Finalists were picked by over 150 business professionals nationwide during preliminary judging in April and May.

In addition to peer judging, each and every new product or service that gets nominated in the American Business Awards was automatically included in the vote for the People’s Choice Stevie Awards for Favorite New Products. In addition to that, more than 140,000 votes were cast by the general public from May 12 through June 3. The winners were honored at the ABA Awards Banquet in New York on June 20.

Computers, Desktops, Laptops, Servers and the latest in Portable Tablet PCs are available from your computer rental company, Rentacomputer.com.