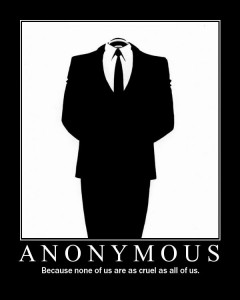 In a surprisingly defiant statement addressed primarily to Director of the FBI Steve Chabinsky, members of Anonymous and LulzSec have vowed to continue with their hacking campaigns and even went as far as to dare law enforcement officials to try and stop them.

This statement arrived just two weeks after 14 alleged members of Anonymous were arrested by the FBI in connection with a series of distribute denial of Service (DDoS) attacks against PayPal last year. This statement from the hacktivists seems to have been in response to comments made by Chabinsky in a NPR report following the arrests.

Chabinsky is quoted in the report as stating that chaos on the internet is unacceptable. “Even if hackers can be believed to have social causes, it’s entirely unacceptable to break into websites and commit unlawful acts.” In Anonymous’  response, posted on Pastebin.com, the group members claimed that they were motivated by a desire to expose what they say are lying governments, corrupt corporations and powerful lobbyists.

“We will continue to fight them with all methods we have at our disposal, and that certainly includes breaking into their websites and exposing their lies,” the statement reads. “We are not scared anymore. Your threats to arrest us are meaningless to us as you cannot arrest an idea,” the group continues. The two groups are claiming that the reason they are acting like bandits and outlaws is because they have been forced to. “The Anonymous bitchslap rings through your ears like hacktivism movements of the 90s. We’re back — and we’re not going anywhere.”

Due to the fact that both groups are highly decentralized and loosely organized, it is hard to determine just how much of the threats are blowing smoke, how much of it is real or how much of it represents that actual feelings and motives of the members. Needless to say, Anonymous and LulzSec have demonstrated their ability to strike at will on any target they see fit.

Just yesterday the group released a 36-page restricted document that is claimed to have been stolen by hacking into a web server at NATO, the North Atlantic Treaty Organization.The group stated in a Twitter post that it had 1GB of material from NATO which it would not release because that would be irresponsible.

The attacks from both Anonymous and LulzSec have mainly been designed to embarrass and provoke as opposed to create any real damage. In most cases, the groups have cited some political or social cause for their attacks. For example, Anonymous claimed it attacked police union sites in Arizona due to the state’s tough immigration laws.

However, law enforcement officials are not just sitting back twiddling their thumbs.  Raids conducted last week saw a total of 14 individuals who were allegedly members of Anonymous arrested. Several more arrests have been made overseas as well. Last month, U.K. police arrested Ryan Cleary, a 19-year old who is believed to be connected to both groups.

Computers seized in these arrests are likely to lead police to even more arrests and more people connected to the groups. Whether or not these arrests, as well as further ones, will dampen the spirits of the hacktivists or spur them on to more attacks remains to be seen.