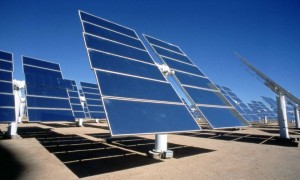 Nearly every technological company out there these days is doing its best to make the technologies we use every day more energy efficient. Well, Intel is on the right track as the company only needs a solar cell the size of a postage stamp to power a computer processor.

Intel debuted this technology at its annual Developer Conference in San Francisco recently. The feat was less about how the chip was able to operate under solar power and more about how the employees of Intel were able to create a chip that ran on no more than the power needed to turn on its transistor, or what is known as the “threshold” voltage.

Justin Rattner, Chief Technology Officer of Intel, stated that the experimental processor was five times more energy-efficient than the processors we have and use today. However, he did emphasize that the processor is nowhere near ready for prime time use.

This chip was based on a redesign of a Pentium processor that is over 10 years old. In addition to that, the underlying technology is so old that Intel’s employees were forced to dig through eBay just to find a motherboard that they were able to plug the chip into. According to Rattner, the decision to base the work on an old chip design is a testament to the difficulty of the engineering challenge.

The Pentium has a drastically different and more simple design than the chips you find today, thus creating the task of redesigning almost all of the circuits in order to make them work at such a low power output. However, due to the age of the chip, this process was much easier and manageable for the small group of researchers.

The research was aimed at demonstrating the fact that extreme power saving options are available, Rattner stated. “People these days will kill for another 15 or 20 minutes of battery life, and here you’re saying you can improve battery life by a factor of 5 or 10.”

The promise of the research conducted by Intel is that solar-powered processors could start completing small projects, like powering small sensors that wirelessly communicate with other computers. This could also potentially be incorporated into more advanced computers in hopes of performing bigger challenges.

According to Rattner, “The applications are almost endless for it.”

Source: The Sydney Morning Herald – Solar-powered processor a glimpse of the future?