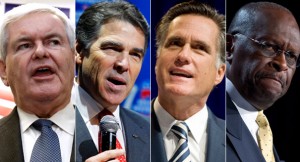 At Tuesday’s CNN-sponsored GOP debate, three Republican Presidential candidates stated that cyber attacks pose an emerging national security threat to the United States of America. In his closing comments during the debate, GOP hopeful and former Speaker of the House Newt Gingrich said that he views cyber attacks as one of three major security threats the United States is currently unprepared to deal with.

Before the events of 9/11, and even today, the biggest threat to the United States was the use of a weapon of mass destruction (WMD) in an American city, Gingrich noted. “The second is an electromagnetic pulse attack, which would literally destroy the country’s capacity to function.” The third was noted as being a cyber attack.

Both Gingrich and Cain were responding to a question posed by Marc Thiessen, a visiting fellow at the American Enterprise Institute, who asked the GOP candidates to identify what they see as unexpected security threats of the future.

During the Presidential debates of 2000, then-Governor of Texas George W. Bush was never asked about the threat from Al Qaida, though the battle with that group dominated his presidency. Thiessen added, “What national security issue do you worry about that nobody is asking about, either here or in any of the debates so far?”

The third and final GOP candidate to raise cyber attacks as an issue in response to the question was current Texas governor Rick Perry. In comments stating that his belief that China was destined for the “ash heap” of history, Perry said that the People’s Liberation Army (PLA) involvement with cybersecurity is a major issue that the United States has to deal with now.

Later, Perry’s press office issued a statement saying that Perry viewed cyber attacks as an emerging threat to the nation. “As president, he will view them as seriously as a physical attack. Cyber attacks could target our military, important utilities and the countless computer systems upon which our economy depends.” the statement read.

In addition to that, this statement advocated the need for both defensive and offensive cyber capabilities so that China and others who launch cyber attacks against the United States know there will be repercussions. The other comments by the GOP hopefuls suggest that cybersecurity issues will be a major topic for discussion in the upcoming 2012 presidential election. Currently, Congress is considering more than a dozen pieces of cybersecurity legislation and there is also a growing awareness in Washington about the need for a strong national policy for dealing with emerging threats.

A Tech Travel Agent can get a laptop rentalto you within 24 business hours in over 1000 cities worldwide. Call 800-736-8772We have 3987 Installers, Technicians and Engineers stationed in nearly 1000 locations worldwide to serve you.