Did Infamous Hacker Group Anonymous Get Hacked Themselves? 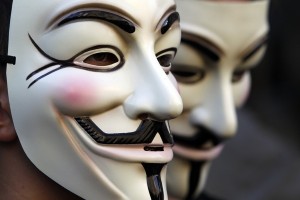 There is nothing sweeter than poetic justice. Somebody getting what is coming to them is really one of the best things somebody else can witness. It can be great if the person getting what they deserve is getting something good, or it can just be flat out ironic. Such is the case with Anonymous, the infamous “hacktivist” group that has been plaguing criminals, bank managers and politicians for months now.

If reports from Symantec are true, then members of Anonymous were tricked into downloading a Zeus Trojan that release all of their banking details and other personal information. Symantec described on its blog how, on January 20 members of Anonymous used their own personal computers to participate in DDoS attacks.

The attacks were launched against a plethora of different targets, like the Recording Industry Association of America and the Federal Bureau of Investigation itself. However, it appears as if some crafty hacker was able to insert a Zeus Trojan into the Slowloris attack tool, the same tool that many DDoS hackers are fond of using.

As soon as members of Anonymous downloaded this tool, all of their banking information was exposed and sent to a remote server. Anonymous, however, is none too happy about the allegations that (arguably) the world’s greatest hackers were indeed hacked themselves.

On the group’s Twitter feed a post read, “This post from @Symantec about @YourAnonNews’s spreading the DDOS hijacking trojan is wrong & libelous to say the least http://goo.gl/MUVxD.” A Tweet immediately following that one read, “Dear @Symantec – @YourAnonNews NEVER posted the DDOS hijacker nor did we attempt to trick people; instead we WARNED of it.” A third and final Tweet went up saying, “Also, @Symantec – maybe if you paid attention to more details and did proper due diligence, your source code wouldn’t have been stolen. SMH.”

It stands to reason that a “member” of Anonymous is indeed responsible for the hack. After all, it is assumed that almost all of its members have never met in person and that all contact is initiated via the internet. All it takes is one guy to come in and spoil the party.