ACTA Gets Rejected by European Parliament, Joins SOPA and PIPA in the Losers Corner 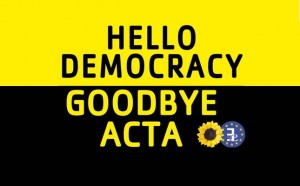 In a bit of joyous news from Europe, members of the European Parliament rejected the highly controversial Anti-Counterfeiting Trade Agreement (ACTA) on Wednesday by an astounding 478 votes to 39 votes. This result was widely expected internationally and also means that the agreement can’t become law in the European Union or any of its member states. The vote came after a hopeless attempt by the European People’s Party to delay it failed.

Digital civil liberties groups from around the world have praised the result, calling it a huge victory for citizens. This praise follows a concentrated campaign to reject the anti-piracy agreement, which was aiming to enforce intellectual property rights.

ACTA, which is the European equivalent to SOPA and PIPA in the U.S., was signed by the European Commission and 22 E.U. member states back in January, though many countries quickly backed out on their decision to sign after widespread civil rights protests throughout Europe erupted. The digital chapter is the major sticking point, which protesters claim leaves the door open for countries to force ISPs to police their own customers.

In addition to that, parliamentarians were angry that the deal was largely negotiated in secret and only came to light when initial drafts were released by Wikileaks back in 2008.  Kader Arif, a French member of the European Parliament who is responsible for assessing the agreement, resigned from his post in January as well, calling the negotiations a “masquerade”.

The European Data Protection Supervisor, which is Europe’s top data privacy watchdog, criticized the anti-piracy agreement back in April and warned that it could lead to widespread monitoring of the internet and breaches of individuals’ right to privacy.

With more and more pressure piling on Parliament to reject ACTA, the European Commission asked the European Court of Justice (ECJ) for its opinion and urged Parliament to wait for a ruling. The European People’s Party called a vote on whether or not to delay a decision on ACTA until after the ECJ ruling, though it was out-voted by colleagues 420 to 255.

The international agreement can only enter into force if ratified by 6 of the 11 signatories which includes the E.U., Australia, Canada, Japan, South Korea, Mexico, Morocco, New Zealand, Singapore, the United States and Switzerland. However, Mexico has already rejected it while Australia and Switzerland look ready to do the same. Even Japan, where the deal was signed, is having second thoughts. The vote by the E.U. is likely to make resolve to dismiss the act even stronger.