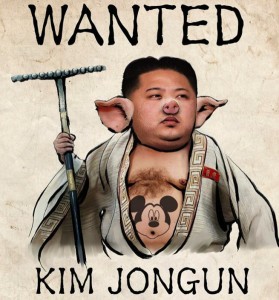 Anonymous seems to have a little bit of a grudge against North Korea, but honestly, who can blame them? This time the hacktivists took to the country’s Twitter and Flickr pages to express their displeasure with North Korea, citing the threat posted by the country’s government.

The Twitter feed of the country showed a series of tweets with links making fun of the country’s leader Kim Jong-un. One such link portrays Jong-un in an unflattering manner and criticizes him with “threatening world peace with ICBMs and nuclear weapons” and “wasting money while his people starve.” The country’s Flickr page displays the same image with the caption “We are Anonymous.”

In addition to that, Uriminzokkiri.com, a North Korean news and information web site, was also hacked. The site is currently unavailable thanks to a DDoS attack by Anonymous. The Distributed Denial of Service attack is Anonymous’ calling card, so to speak.

Anonymous took credit for stealing account information from Uriminzokkiri.com in a post on Pastebin and stated exactly how it was able to get inside of Kwangmyong, the country-wide intranet for North Korea.

According to Anonymous, “We have a few guys on the ground who managed to bring the real internet to the country using a chain of long distance WiFi repeaters with proprietary frequencies, so they’re not jammed (yet). We also have access to some N.K. phone landlines which are connected to Kwangmyong through dial-ups. Last missing piece of puzzle was to interconnect the two networks , which those guys finally managed to do.”

This is the second major attack Anonymous has launched against North Korea. The group allegedly leaked account information from Uriminzokkiri.com, posting some of the information on Pastebin. The group claimed to have hacked more than 15,000 membership records from the site and threatened to wipe all of the data.

Anonymous could continue the attacks if their demands are not met. Anonymous is demanding that:

North Korea has become feisty as of late. The most recent threats by the country includes it declaring a state of war against South Korea and threatening to launch nuclear weapons against the United States.