Supercooling Your PC With Magnetic Fields 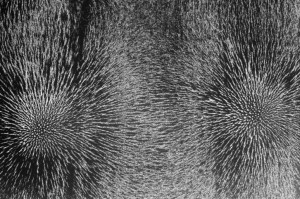 It’s a known fact that mechanical stress helps the transfer of thermodynamic energy in a closed system. This happens every time you press something that you are cooking into a pan on your stove of on a grill, it greatly increases how efficient the heat transfer from the metal to the food is. Generally we look at it from the perspective of using the pan to transfer heat to the food. But, from another perspective, we could say that we were using the food to actually remove the heat from the pan. By pressing the food into it, we are actually assisting the cooling of said pan. Right now a team of researchers are using this knowledge, along with a very strong magnetic field and a ton of metal nanoparticles, to make liquid cooling systems more efficient than ever before.

The basic idea is pretty simple: If you introduce a ton of magnetic particles of metal to coolant, then subject that suspension to a magnetic field, the nanoparticles can dictate the whole flow of the fluid. This actually helps make cooling more effective. The idea is basic enough that it could be applied to pretty much any cooling rig that you could think of, or at least any liquid based cooling rig. And if we keep traveling the same path that we’re already on, more and more of our technology will end up requiring this type of cooling, as it is more efficient than air cooling.

When it comes to much larger cooling rigs, creating a magnetic field will become much more expensive. But this technology could be suited for miniaturization by decreasing the amount of liquid it takes to cool a specific source of heat. These nanoparticles are made of magnetite, which are the most powerfully magnetic of all natural metals in the world. They are even powerful enough to cool a nuclear reactor.

The nanoparticles are attracted to the heated surface of the tube and make chain like structures on the side that is closest to the magnet. What this does is it makes the pipes rougher in certain spots and helps cooling by increasing the momentum of particles in the fluid, and then the energy transfers upon collision. It’s not exactly like pressing food into a pan, but the nanoparticle aggregates can disrupt the flow of the coolant, bringing up the temperature and soaking up more energy. This is all because of the increasing number of collisions between molecules, helping to keep the coolant close to the heated pipes. The nuclear industry generally leans toward passive cooling technologies, the type that work even when there is no power. This makes an actively maintained magnetic field a pretty hard sell, even if it is proven to be effective.

There is a down side to this technology though; It is mostly useful for cooling smaller hot spots in a larger system because it can’t do its work over a huge network of pipes. Computers, like nuclear reactor, both have strong heat producing components that are surrounded by relatively cool components. Systems that seem to have whole systems on one chip are ideal for this type of rig. It allows the cooling system to make the best use of its shorts periods of contact between coolant and their pinpoint sources of heat. It has been said that it will probably be a while before any gaming PC will likely need anything close to this level of heat capacity to run a bleeding edge game engine, but a lot of servers and other machines already look to liquid for more efficient cooling. For now, a gaming PC that needs more cooling can still use the best rgb case fans for better airflow and aesthetics.

This is the first practical demonstration of an idea that has been talked about for a very long time. One huge advantage is that it could more than likely be used to augment existing coolant systems with the addition of carefully placed electromagnetics and a little bit of magnetite nanoparticles. The researchers even suggested it could be used to make fusion reactors a reality. For such a simple idea and such simple science, this technology could literally change the world. Well, maybe not the world, but some really cool parts of the world like the inside of your gaming PC.