Could This New Software Interface Turn Your Home Into Something Out Of The ‘Iron Man’ Movies? 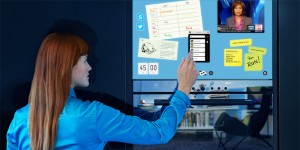 It’s almost unfair to watch movies these days. Think about it. How many time have you been watching a movie, only to see some amazing fictional technology that you wished was real? Everything from “I, Robot“, to “The Minority Report“, to even the recent “Iron Man” movies show some type of futuristic technology that has allowed the characters in these films to interact with their surrounding in a completely different, more digital, way than we do in reality. Watching as the movie’s characters would touch screens and move around different applications like maps, files, spreadsheets, and diagrams. Well this may become a reality sooner rather than later. Not only that, but should it become possible, the implications could be overwhelming.

A software company called Dizmo, based out of Switzerland, has been working on just such an interface that could make all of those sci-fi fantasies come true. The actual interface is designed to let the customer move and manipulate any app on glass surfaces, like TV’s and tablets. The multiple features of the software are extremely responsive as well. So, should you grab a map, expand it, and interact with it, all of its visual elements will have adjusted to the size as well. Apps can be combined if dragged and dropped into one another as well. For example, a temperature app containing a thermometer can be dropped into an light app. This will result in a light bulb visually showing the temperature based on the color of the bulb. There will be more of these types of app combinations in the future, but for now things like this are still really cool to see.

The Dizmo software is currently being funded by a Kickstarter campaign that has already reached its goal, and still has 10 days to go. With their original goal of $25,000 already surpassed, CEO, Matthias Aebi will be able to see this interface released sometime in early June. The real question is, what will this mean for the people that will be able to afford and use this new software? As some of you may recall, the “Leap Motion Controller” performs the same basic functions of this software, but in real space with the users hands. 9 out of 10 of us are still using a mouse, keyboard, or trackpad to get our work done still, so there are some practicality concerns.

If Dizmo is able to take off and become a software interface that can actually see practical use in the office or home, it might possibly change the game. Having the freedom to dock different Dizmo’s together so that they can work in conjunction with each other is something extraordinary to say the least. The ability to have multiple apps working in tandem, at the same time could not only increase productivity by cutting down on time, but also bring a higher level of interaction with our digital work. The makers of Dizmo are also including a Dizmo SDK so that others may build their own Dizmos. Needless to say this product has some definite potential to be seen at home and in the work place, but we will have to wait till this product is released to see how well it truly works.