Is Your Firewall Good Enough For You? 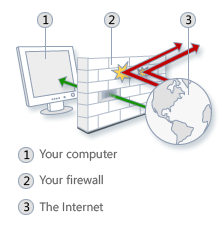 Firewalls are easily considered one of the most essential features of security for your computer. A firewall is a network security system that controls the incoming and outgoing network traffic based on applied rule set. A firewall establishes a barrier between a trusted, secure internal network and another network (e.g., the Internet) that is assumed not to be secure and trusted.

Hardware and Software Firewalls
The hardware firewall in a broadband router is primarily concerned with keeping bad stuff from the outside from getting in. The limitation of this type of firewall is that it typically treats any kind of traffic traveling from the local network out to the Internet as safe, which can sometimes be a problem. For example if your computer has a malicious program that sends out spam messages, a hardware firewall would not stop that from happening.

Software firewalls run on the computers individually. A software firewall is able to take a closer look at malicious traffic and intercept it before it leaves your computer. According to Microsoft, the most effective and important first step you can take to help protect your computer is to turn on the Windows firewall. If you have more than one computer connected to a network, it is important to protect every computer. You should have a hardware firewall (such as a router) to protect your network, but you should also use a software firewall on each computer to help prevent the spread of a virus in your network if one of the computers becomes infected.

Need help with a firewall? Contact Computer Service Now to schedule a technician or engineer to help.