The OSI model is used to represent how data is transferred from one device to another. This model has been a standard in the IT business for quite some time and is widely accepted throughout the industry.

Some hardware is often described using this model, for example, when a switch is described as a Level 2 or Level 3 Switch. The OSI Model from top to bottom is as follows Application, Presentation, Session, Transport, Network, Data Link, Physical. Let’s go into further detail about each group and how they transfer data.

We’ll start by making a scenario where two employees, let’s call them Paul and Jane. Paul wants to send an email containing a word document to Jane, who is across the room. Paul is across the room and is in no desire to travel to Jane’s desk to give her the document with a flash drive, so instead, he decides to send it over the internet. From here, we can further explain what each layer does in order to get a small amount of data we see to Jane.

Layer 1 or the Physical Layer is the layer in which all cables and hubs are located. This is the layer in which we discuss how the data is transferred. The Physical Layer includes wireless signals ethernet and fiber as well as DSL or a standard hub. You can think of Layer 1 as the backbone of the entire OSI model, think of this layer as the mail delivery truck. Without these, the package or data will go nowhere.

Layer 2 is the Data Link Layer, this is where the NIC or Network Interface Card is located. Historically a NIC is a physical card you install into your machine, but in today’s modern technology a NIC is built into motherboards. The Data Link Layer is the layer in which MAC Addresses are handled. MAC addresses are the definer for your NIC; each NIC has one and not one is the same. Every NIC that has ever been used has a different MAC Address then the last so PCs can identify one another. Layer 2 does exactly this: it defines your MAC address and the target PC’s MAC Address and puts in on a frame, like a package in the mail, and loads the contents inside for shipping.

Layer 3 is the network layer. IP or Internet Protocol addresses are assigned in this layer. An IP address defines your PC logically and is given to your PC by a network administrator. This is not to be confused with the already mentioned MAC Address that identifies a PC physically. An IP address is an address that identifies you on the network. Similar to mailing procedures, the address to your home is a physical location it identifies the home, your name or whoever owns the home can change, but at that moment you define the location. This layer determines the route each data packet will take along to its target destination. 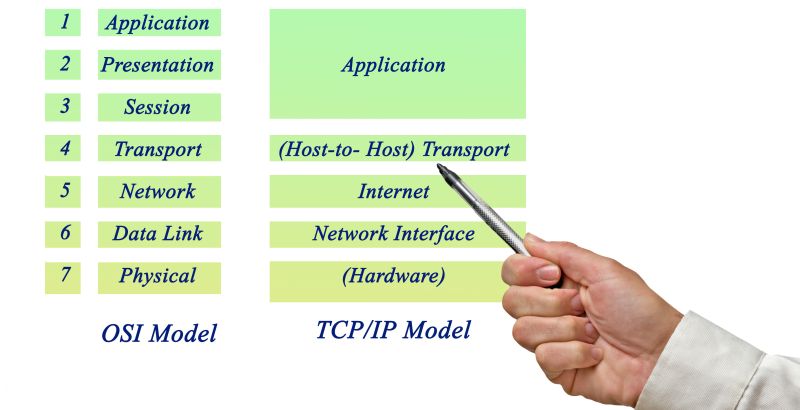 These two layers go hand in hand with each other. The Transport layer, or Layer 4, segments the data into packets and sends it outbound to its destination; then waits for a return before sending more data. According to HowStuffWorks, a standard packet for data transfer is from 1000 to 1500bytes. Since this is the standard size, data packets must be segmented in order to send.

The Session Layer, or Layer 5, monitors traffic before sending it over. The Session Layer serves much like a red light. If traffic is already going in that direction, then it holds the data that was just sent until the previous traffic is done transferring.

Once the previous traffic is done transferring, then the Session Layer will allow the data packet to be sent. After some of the packets are received, a success message is sent back to the Transport layer and allows it to send more packets. Once all the packets are received on the other end it begins to recompile the packet. Furniture delivery would be a great example of this. Sending a couch to a home can be too large to ship together, so in packaging and shipment, they are shipped separately. Upon arrival to the buyer, the couch is then assembled and you once again have a complete couch.

These are the last two layers to the OSI model and can almost be grouped together as well. Layer 6 is the Presentation layer. Computers talk in a language we know as binary, a form of ones and zeros that make up the language for technology. These ones and zeros are received at Jane’s PC, but at that moment none of her programs understand it, the presentation layer, in better terms, is a translator that comes in and reads the message, then displays it in a way that programs, like Microsoft Word and Gmail, can understand.

The Application Layer, or Layer 7, then reads this and outputs it to the proper API, or application programming interface. This is the type of code, mail or word documents or .jpegs are coded in. It then gets sorted and displayed.

Thanks for reading our discussion on the OSI Model. Although that was it for this discussion, we can use this information to better understand our Tired of Waiting For Slow Internet article.

We’re here for you

When you need to spend more time keeping your business running–and less time worrying about keeping all of your employees connected, that’s where Computer Service Now comes in. Our computer services, conference room technology assistance, IT consulting, and other services offer you an easy and hassle-free option to keep your computers, servers, and business services running smoothly.

With our high level of customer service and satisfaction, Computer Service Now works hard to be the premier IT firm in the Cincinnati and Dayton region. We offer a wide variety of IT solutions that stay within your budget. For IT-related projects big and small, our experience, expertise, and variety of services allow us to provide the support you need to meet your business needs. Contact us today and let us solve all of your IT needs today!

Subscribe to our blog today to stay up-to-date with Computer Service Now and follow us on social media. Join the discussion by commenting below.