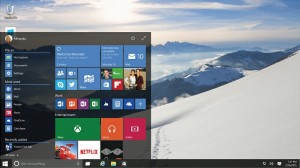 First Year Free
The first exciting bit of news is the one that has been swirling around the internet all day, and that is, for the first year of its release Windows 10 will be free to upgrade to. So if you have Windows 7 or 8 you will be able to purchase and install Windows 10 free of charge. Once it is installed you will be receiving the same support as someone who purchased it. A free OS upgrade is a pretty huge deal; normally OS will cost you a little over 100 dollars. I know a lot of people were resistant to Windows 8 based on its Metro look, but the good news is that they combined the old school feel, and the new metro look into one nice smooth UI.

Cortana
Another great little tidbit is that Cortana is going to be coming to Windows 10 as well. If you are unaware Cortana is the Microsoft version of Siri. As it stands Cortana is already a stronger version of the software than Siri, and they have gone to great lengths to make her voice more fluid and human-like. They will be docking her near the start menu and can use it for voice and non-voice related functions. It will be a fun little feature that might make life a bit easier for people.

Spartan
Microsoft has gone to great lengths to make Internet Explorer a good browser, but to be honest it is a rather looked down upon browser. People love Chrome and Firefox, but it looks like they are scrapping that project and moving over to Spartan. Spartan will be taking on the role of the default browser and is looking very solid. They have made the browser cleaner, faster, and more resistance to the average spyware and virus.

Gaming
Microsoft has gone to some great lengths to make gaming more enjoyable, including streaming the Xbox one to your Windows 10 device. That means you can play your Xbox one from your tablet, phone or PC. They are also introducing Direct X12, which they are claiming will show improvements of performance of up to 50%. It also looks like Fable Legends will be set up for cross platform play. As well as the games and improvements on Direct X12, Microsoft is going to make it easier to view and store clips of video games. There will be a default folder for it and can be quick accessed at any time. I think they made a lot of good steps for PC gamers here!

Holographic Headset
Last but not least, they showcased their holographic 3D headset. It reminds me of having Jarvis from Iron Man and Google Glass; with it you can see holographic images and doing wireless computing with it. There are no limits to what people are going to be able to do with this tool.

Microsoft covered a lot of really great information which will likely shape the future of the operating systems and computers for a long time. With Windows 7 hitting the end of its natural life and going to extended support, now is a good time to join the new OS which will likely be amazing!

If you need help with your PC, contact us!